It’s kind of about working on yourself.

Nana is a thru hiker, and her husband Bill supports her from their Bay Star—all while seeking out his own photographic opportunities. Watch the video and read their story below.

Somewhere in the middle of the desert in central Arizona, a Newmar Bay Star pulls into a small, flat lot. It’s clear aside from a few Saguaro cacti and jumping cholla. Bill Langton navigates the gas coach off the road, easing slowly to a spot that feels good. When he opens the door, his Australian Shepherd pup, Finn, tears out. Bill adjusts his hat, looks briefly toward the mountain range in the distance, and sets to work. Somewhere out there, his wife, Nana, is bounding along the Arizona Trail.

The Bay Star is a 2018, brilliant black and gold, and shining in the desert sun. He levels it, gets the slides out, and sets up a little patio area. He’s prepping for Nana’s return tonight, where she’ll briefly stop off the trail. She’s been on the trail for about five days, and he’s meeting her this evening at a trailhead.

Nana’s trail nickname is Pinball, and after spending about ten minutes with her, you can understand why. She’s a source of endless energy and moves seamlessly from one task to another. And forget about keeping up with her on a trail. Going up or down—let alone on flats—she practically glides along the path, precarious rocks or not. She gets an easy four strides in between each click-clack, click-clack of her extendable hiking poles. Of course, this isn’t her first go at this. Far from it. 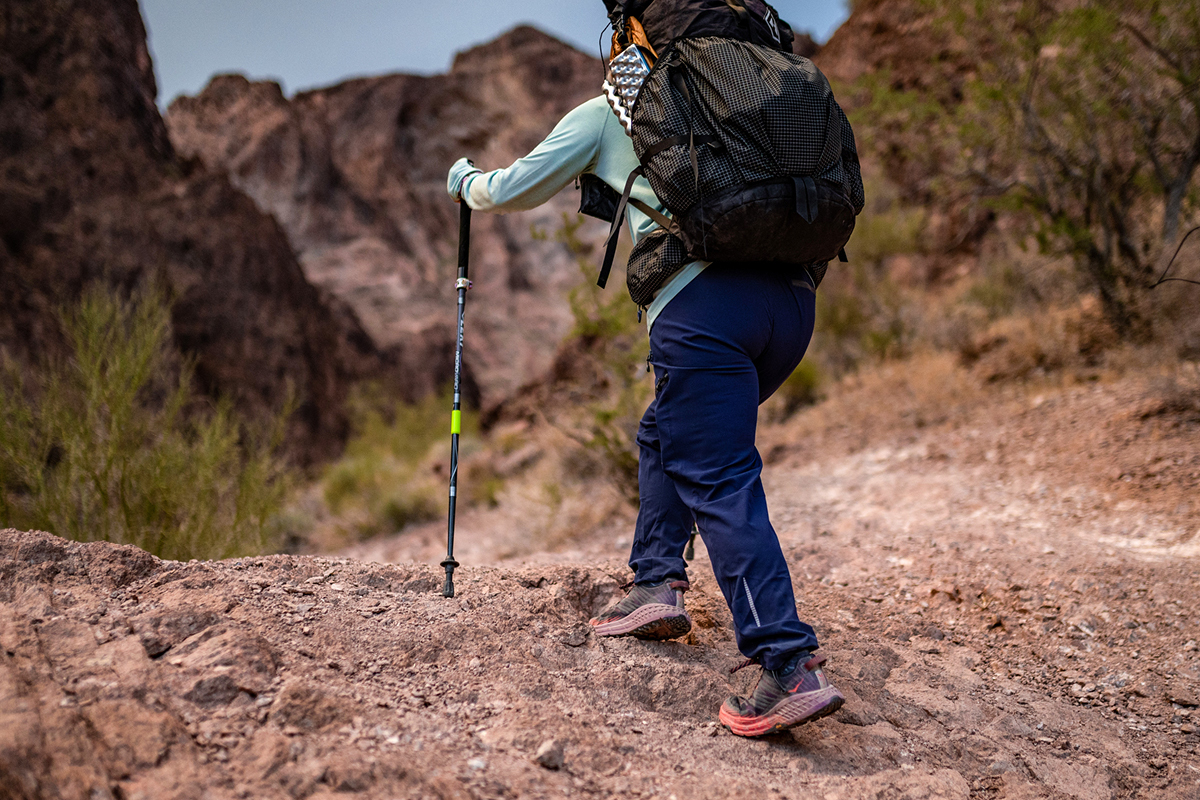 “I started at eight years old, at a camp in Yosemite. That did it. It turned me into a thru-hiker,” Nana says. Ever since, she’s pushed herself farther and farther, and her list of achievements is nothing less than astonishing.

Ready to see how others are living the Newmar lifestyle?

Head to the Owner Stories Hub to explore more 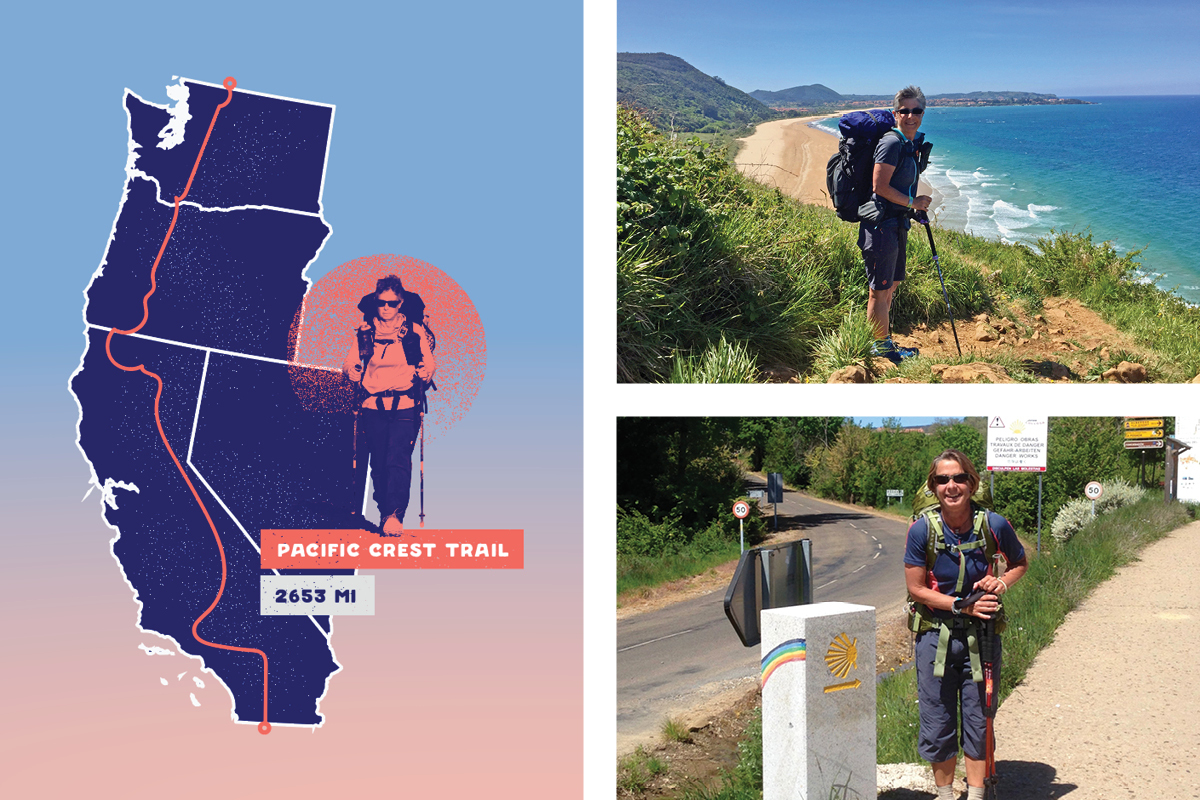 Now, she’s out to finish the Arizona Trail, which clocks in around 800 miles. A year ago, the COVID-19 pandemic pulled her and her “tramily” (a portmanteau of trail and family) off the trail when they had just about 450 miles left.

Moose in the Desert

Hence why Bill is setting up Moose, the nickname for their Bay Star, to boondock in the desert. Nana will enjoy a “zero” day—one where she doesn’t hike any miles. She’ll use this as an opportunity to clean up, rest, restock, and refuel. But for now, it’s about setting up a welcoming site for Nana.

“This rig is easy for me as an individual to handle. It’s intuitive. When you’re off pavement—away from a traditional camping site, like we often are—you can still get a nice, level rig,” Bill says. “And it’s well-suited insulation-wise for changes in temperature, or we can still run the furnace or fans. It’s ideal for boondocking.”

“We’re actually going to go solar,” Nana adds, “so we can be out longer and not have to worry about firing up a generator just to make coffee in the morning.”

Bill doesn’t take his support role lightly, but that’s not to say he doesn’t enjoy his own time out in the desert—or anywhere else they happen to be. A retired Sheriff’s Sergeant from California, he’s now a semi-professional photographer (though he very humbly calls himself an amateur). While Nana hikes, Bill splits his time between finding a place where the road intersects with the trail to provide her support, and finding his own sites for photography. 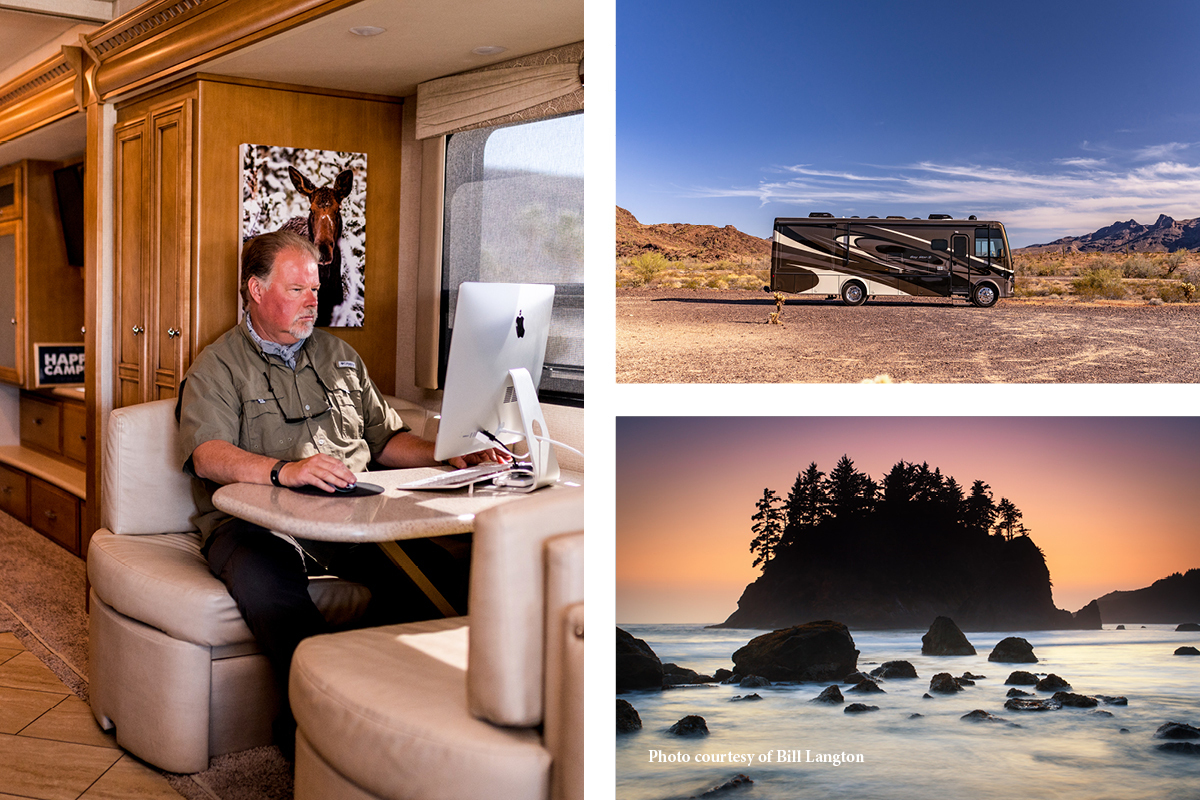 “While she’s on the trail, I can spread out in the Bay Star,” Bill says. “I normally try to start my day figuring out if I’ll be staying put in a particular area and—if so—what kind of photographic opportunities present themselves to me.”

He sets up his desktop Mac on the dining table and scours the internet for places he may want to photograph and, thanks to a variety of apps and tools, figure out a time to be there as well.

Bill’s “hobby” began when he was a young police officer. His training officer was also an avid photographer, and taught Bill to carry his camera equipment around in the squad car. While they were often tasked with taking pictures of crime scenes, Bill also used his gear to take shots of local scenery during moments of downtime.

“Nature and wildlife have always been my passion,” Bill says. Inside the rig, there are several prints of his own shots—including one of the eponymous moose. 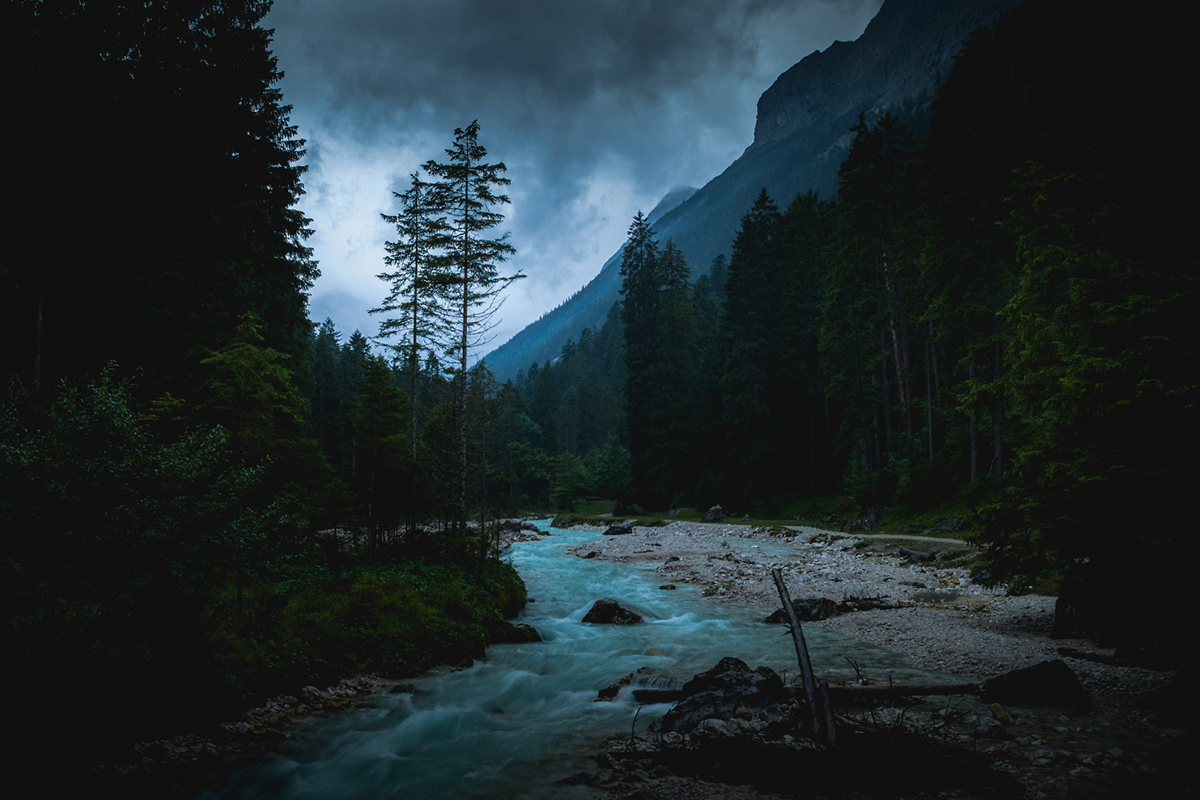 Their introduction into the world of RVing was, as they describe it, a no-brainer. On a camping trip with friends in the Sierra Nevada mountains of Northern California, Nana and Bill were camping in a small tent. When summer thunderstorms rolled in, they soon found themselves overwhelmed with about two feet of water. “We spent a miserable weekend just generally soaking wet,” Bill says. They moved briefly into the bed of their truck, which had a shell on it, but even that didn’t make the experience much better.

Serendipitously, their friends had rented a pull-behind travel trailer. They, and all the rest of their friends, ended up cramming into that RV. It elevated the entire experience. The kids were able to watch movies and play, while the adults gathered around a card table and enjoyed a few beverages.

They started in the 90s with a pull-behind, then briefly got out of RVing as they built a home. But in the 2000s, they purchased a Class C coach. “As we got a little older, we decided we wanted something with more room. Like a king-size bed with room on both sides. And more carrying capabilities for our lifestyle and the things we like to do in the RV,” Bill explains.

But that move from Class C to Class A wasn’t easy. As they walked around dealership lots, they explored various Class A coaches but couldn’t find any that they trusted.

“You’d walk by one and see the gasket around the windshield was loose. And I said, ‘I’m not going near that. It’s just asking for trouble down the road.’ Or inside these things, the cabinets wouldn’t even line up—and they were brand new coaches. The quality just wasn’t there,” Nana says. 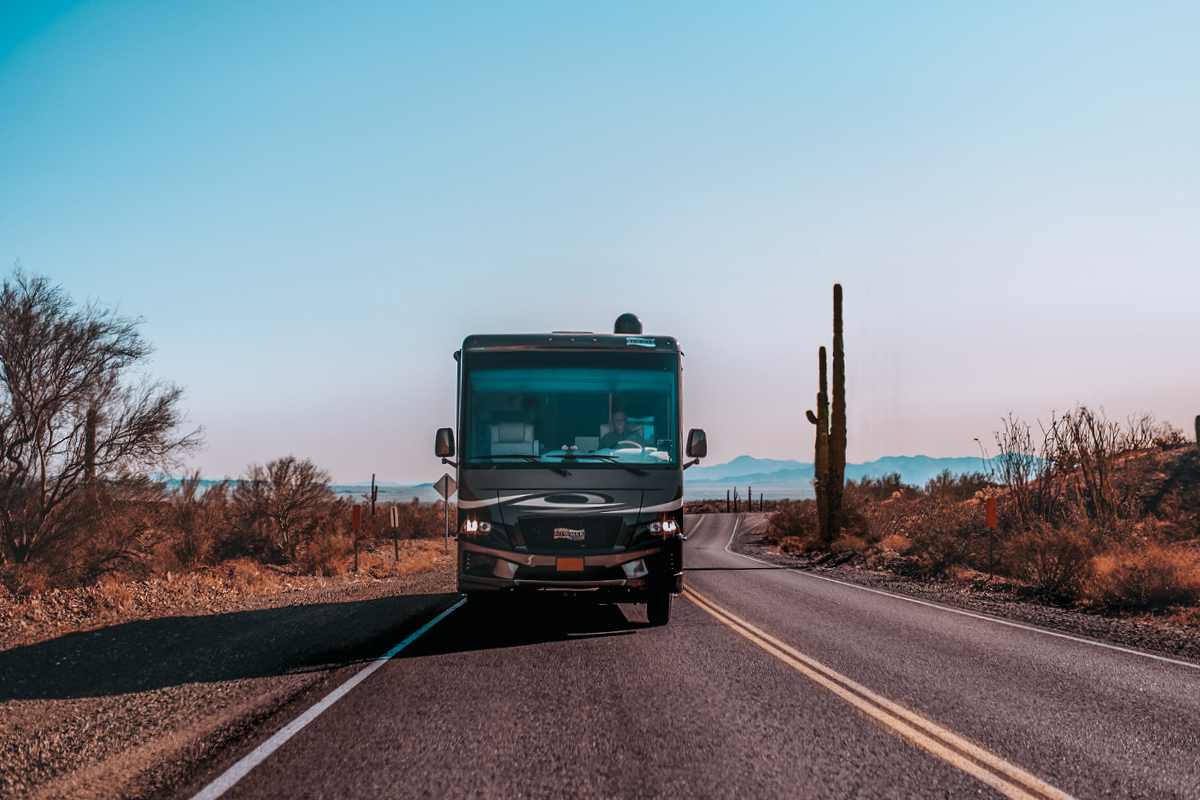 Bill adds, “But when we walked into our first Newmar, there was a definitive difference. I mean, Newmar’s own tagline is, ‘When You Know the Difference,’ and we did. It was readily apparent when we stepped in the coach.”

Since then, they’ve traveled precisely the way they are right now—Nana hiking, and Bill supporting. But that’s not all they do. When Nana isn’t on the trail, they’re travel partners and explore new areas—easy hikes, bike rides, even visiting towns. They’re also avid fans of national parks and opted for a smaller coach specifically because of that. “The size lets us navigate smaller areas, smaller campsites. It’s really versatile,” Bill says of Moose. 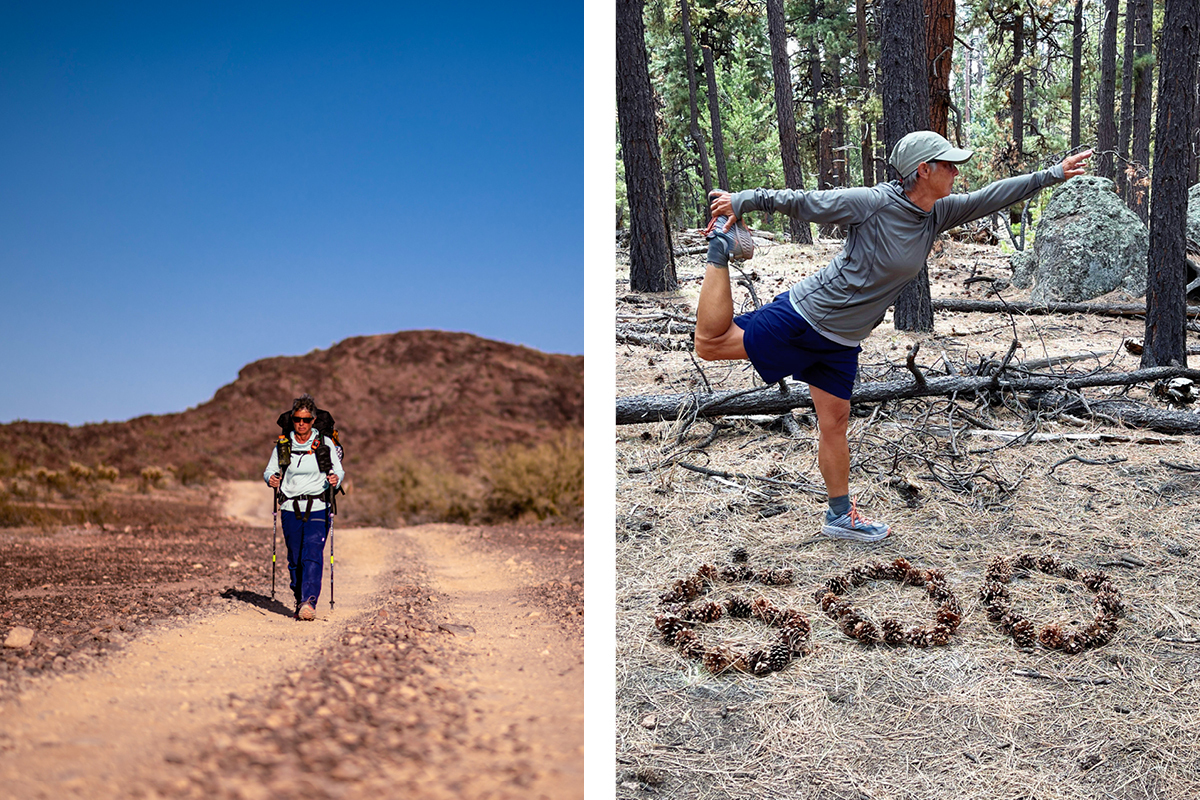 As Nana drifts along the Arizona Trail, she tries to stay in the moment. That’s not difficult for her, given her extensive experience on so many trails. In fact, when she’s not hiking, she’s managing an outdoor store in Oregon and specifically helps outfit hikers for long-distance treks and their own pass at the Camino.

“The Camino isn’t a thru-hike, exactly. It’s more like a pilgrimage.” Her first Camino, she says, was about personal growth. But all her hikes give her something she says she needs, and that we all need. “Being on the trail gives me that ‘me time’ that’s so necessary. You’re alone for parts of the trail, so you can have lots of self-meditation.”

“It’s just about working on yourself,” she says. And while she may be talking mostly about mental health, there’s no doubt that there’s plenty of physical health associated with it too. A normal day for Nana involves an early morning run or a lengthy bike ride. She’s spry and quick, a result of years of dedication and lengthy activity on the trail. 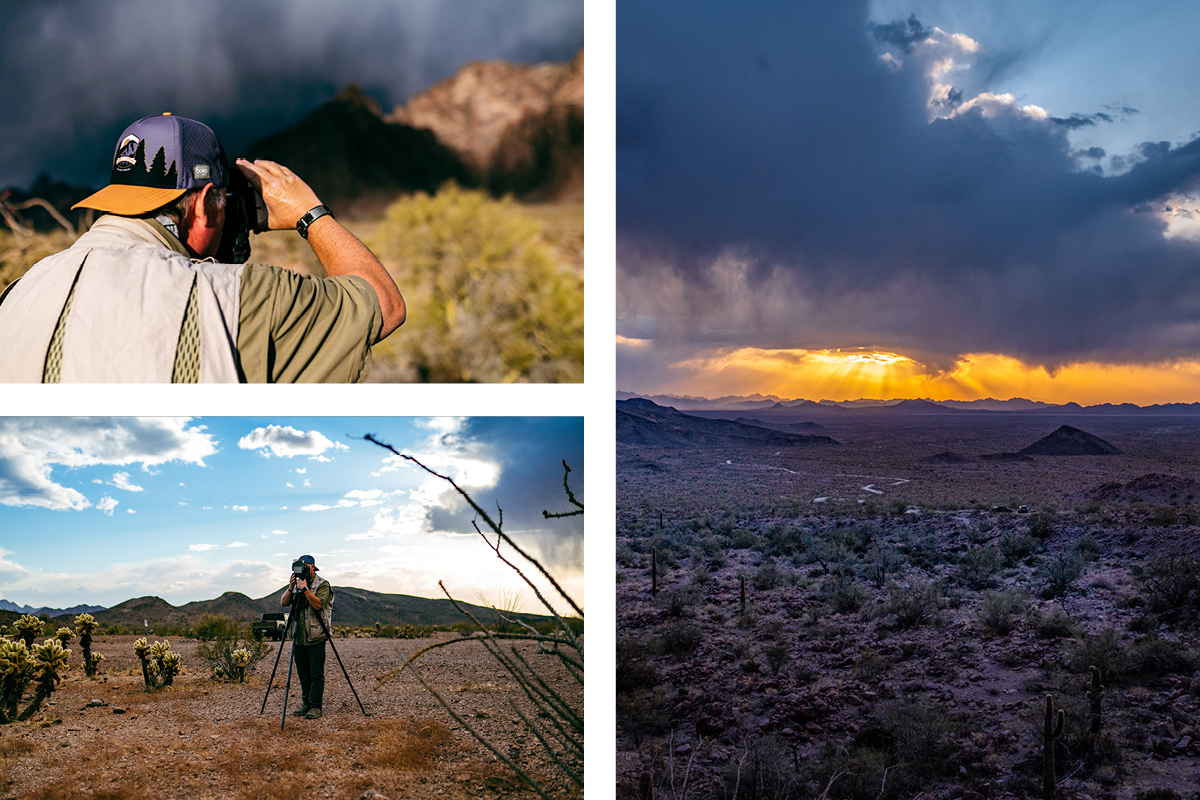 With Nana on her way to finish the Arizona Trail, Bill has unhooked their Jeep which they tow behind Moose. He’s heading out to Kofa National Wildlife Refuge with his photography gear. Kofa contains a brilliant mountain range and a unique area of growth called Palm Canyon. While he won’t climb to get shots of these palms that are seemingly misplaced by nature, the area is perfect as a backdrop for other shots—like the wide expanse of cacti. He sets up his tripod, flips his hat backwards, and starts shooting.

There’s also a rare storm rolling in, looking ominous. Yet it doesn’t slow him down at all. And for good reason, as the imposing storm pushes itself around the mountains and allows Bill to get his shots.

Later, he’ll set up his Mac on the table again, this time to edit his shots. And afterwards, he gets ready for Nana’s return. There’s a grill to set up, and awning to get out, and drinks to get cold.

Shopping for your Newmar? Let us help.

We’re here to help you find the perfect coach for you. 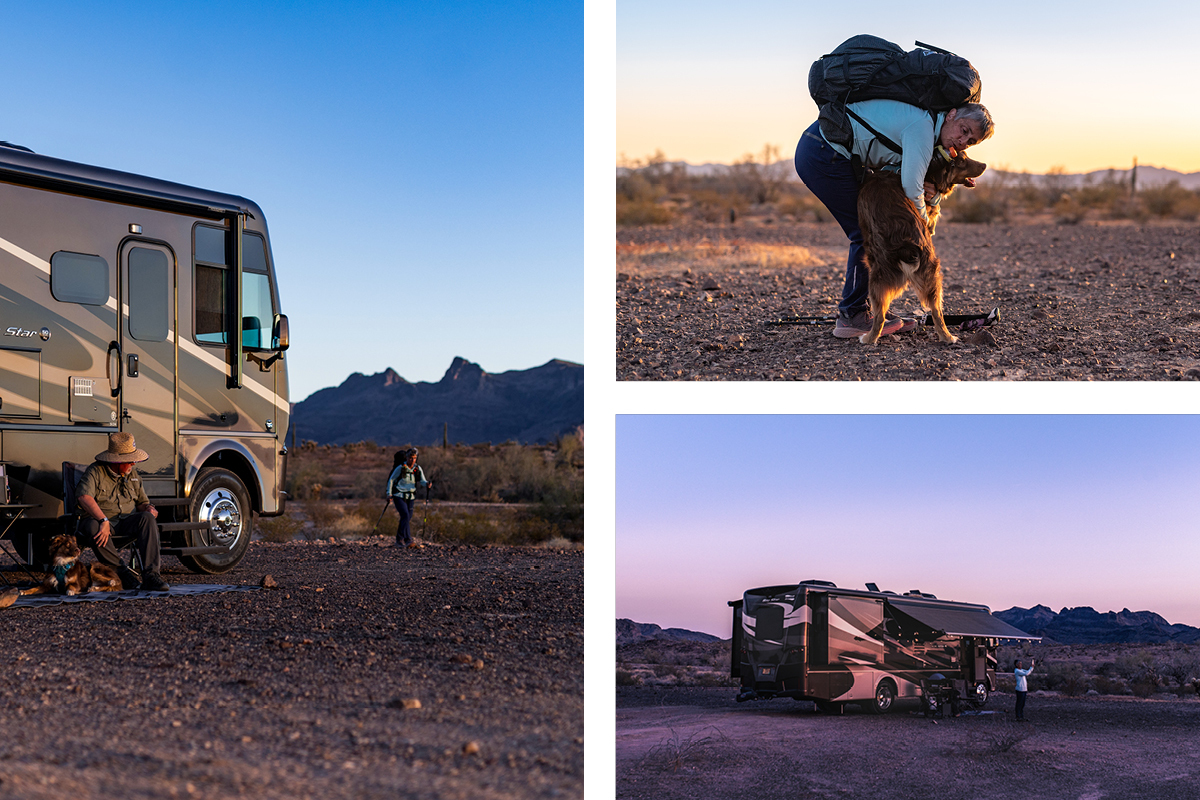 As the sun starts to set, you can hear Nana’s rhythmic boot crunch coming. Finn certainly does, and takes off at a sprint to greet her. Bill isn’t far behind, a couple of drinks in his hands. They hug—it’s been a long five days—and walk back to the coach, where Nana drops her heavy pack and relaxes into a camp chair. Bill mans the grill, all prepared to provide Nana some of her favorite foods: “Steak…bread…salad…fruit…anything fresh,” she says.

These reunions are always sweet for both of them, but after a lifetime together they’ve mastered the ability to focus on themselves as individuals and come together even stronger as a couple.

“Sometimes, it’s really hard for me to leave. But I know this is ultimately for me,” Nana says. “When you’re at home, you get into a routine, or a pattern. But when we’re in the rig, it brings you back together. The communication is just different. We spend more time sitting outside.” 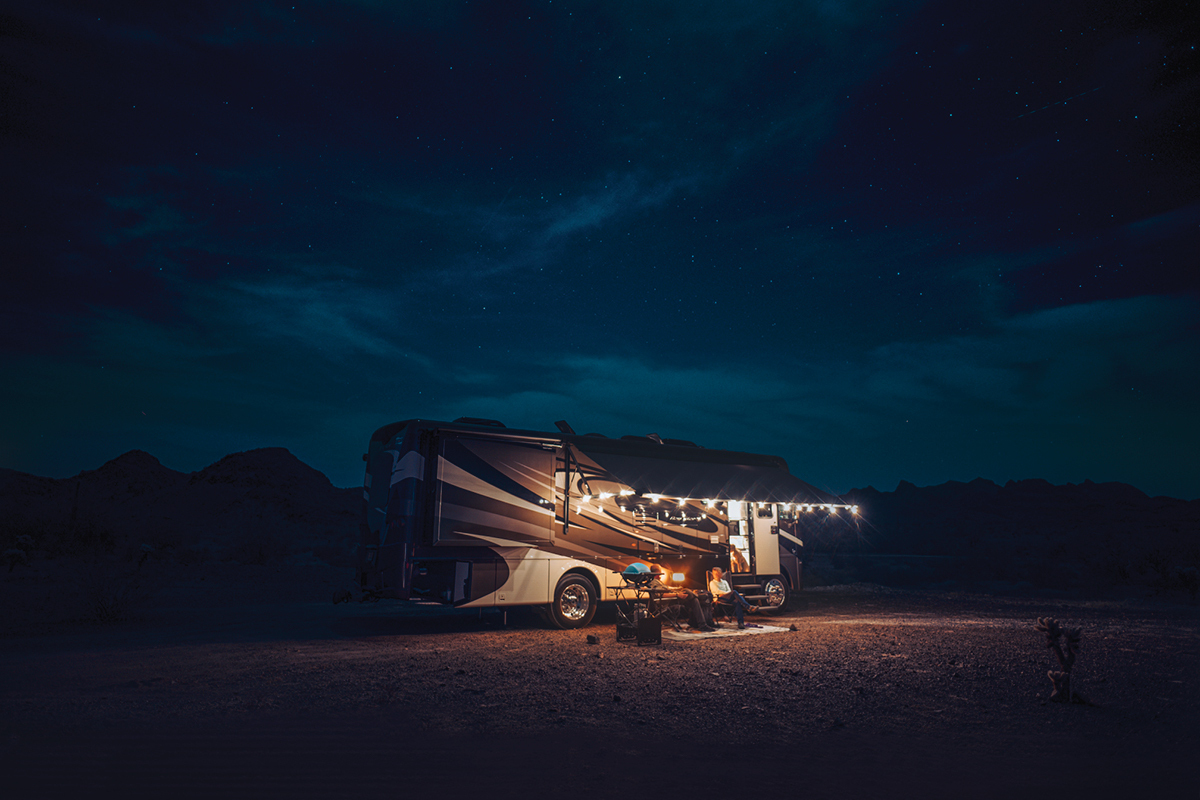 After a zero day, Nana will hit the trail again. And as she restocks and looks out at the mountain range in front of her, she’s balancing the need for her own away time with the urge to stay back here at “home” in the Bay Star.

But she knows the moments on the trail are a big part of who she is.

RV Driving Safety Everyone has seen it: an RV speeding...

What is Boondocking? Loosely defined, boondocking is...

Camping and Hiking with Dogs In an RV, you and your...

Garmin vivoactive® 4 Hiking is a great way to shake...

How to Find the Right Replacement RV Tires for Your Motorhome

Do you need RV replacement tires? A lot of things affect...